As shown in other cell experiments,  the GI-Nc binds to and is successfully endocytosed by Hodgkin’s lymphoma (HL) cells. The next step is to determine the efficacy of the GI-Nc, with both DOX and ZnPc, as a therapy for HL.

In this experiment, we attempt to show that our drug delivery system in its entirety can successfully bind and cause cell death within HL cells. This was done by loading both DOX and ZnPc onto the duplexes, and annealing them on to nanoclew structures. HL cells were then exposed to 4 different conditions involving DOX and ZnPc, and cell viability was examined using a trypan blue assay.

DOX, a chemotherapy drug that functions by inhibiting Topoisomerase II [1], and ZnPc, a photosensitizer for photodynamic therapy [2], can be attached to our GI duplex structure (refer to “Doxorubicin Loading and Release” and “ZnPc + ROS Generation”). Duplexes are then annealed to nanoclews to form the GI-Nc.  When exposed to HL cells, the GI-Nc binds and becomes endocytosed.

After endocytosis, the i-motif structure within the duplex changes conformation and folds as the endosome acidifies [3]. This releases DOX that was intercalated into the duplex, leading to inhibition of Topoisomerase II function.  Additionally, exposure to a 660 nm laser activates the ZnPc, releasing reactive oxygen species – highly reactive free radicals that can kill cells by inducing oxidative stress. This combinatorial drug release subsequently causes cell death.

HL cells were seeded at a concentration of 50 000 cells/mL in a 96 well plate, and were treated with GI-Nc loaded with DOX, ZnPc, or a combination of both. DOX was first loaded according to “DOX Loading and Release”. To load ZnPC, ZnPC was diluted in DMSO to make a stock solution, which was then further diluted in tris-acetate buffer to make the working solution. This was then added to the GI-DOX solution. Final concentrations of DOX, ZnPc and GI duplexes incorporated into the GI-Nc were 20uM, 0.5uM and 1uM respectively. The duplexes loaded with DOX, ZnPc, both, or neither were then annealed to the nanoclews at a ratio of 5:1 (w/w) nanoclew:GI as determined by the GI-Nc annealing experiment

Unbound DOX and ZnPc were separated from the GI-Nc by centrifugation to pellet the DNA. The supernatant containing the excess DOX and ZnPc was then removed and replaced with an equal volume of cell culture media. This also ensured that the cells would not be affected by a difference in osmolarity. The annealed samples were incubated at room temperature for 3 hours.

HL cells were treated with each of the drug combinations and incubated for 48 hours. Twenty-four hours post-incubation, the samples were exposed to 660nm radiation using a laser for 5 minutes. A trypan blue assay was performed on the samples to determine cell viability following treatment. 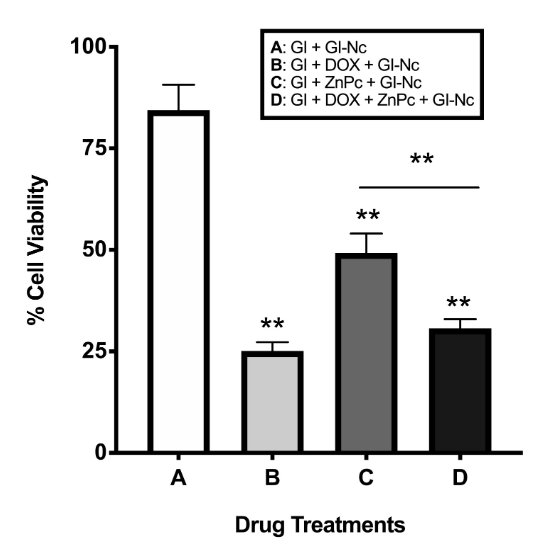 Image 1: GI-Nc can deliver a combination of DOX and ZnPc and successfully kill Hodgkin’s lymphoma cells. KMH2 (HL cell line) cells were incubated with unloaded GI-Nc (A), GI-Nc loaded with either DOX (B), ZnPc (C) or with the combination of the two drugs (D). Percentage of viable cells was calculated and compared between the 4 categories. The error bars represent the standard deviation of the percentage cell viability which is based on three technical replicates from the trypan blue assay used for analysis.

The combinatorial administration of ZnPc and doxorubicin with nanoclews resulted in significant death of Hodgkin’s lymphoma compared to untreated cells; (p<0.05, n=3). 80% of the untreated cells survived compared to 25.1% cells with doxorubicin (B), 49.3% with ZnPc (C) and 30.7% with the combined treatments (D). The results demonstrate that our nanoclew structure successfully delivered the drugs to the cells which consequently led to cell death by both chemo- and photodynamic therapies. The combination of DOX and ZnPc resulted in significantly less viable cells compared to treatment with ZnPc alone. However, doxorubicin led to slightly more cell death although the difference is not supported by statistical significance.

This unexpected observation may be attributable to the wavelength and duration of laser exposure that the cells were treated with. Also, there may the factor of allosteric inhibition of ZnPc binding to the duplex in the presence of DOX, given how the addition of ZnPc to a drug vehicle already containing DOX did not lead to any significant difference in cell death (B and D). Experiments to optimize the simultaneous loading of both the drugs must be performed in the future. Yet, we can conclude from the results that GI-Nc can successfully eradicate Hodgkin’s lymphoma cells by executing the release of both DOX and ZnPc.