In order to be stabilized and protected against degradation in vivo, GI-based drug-loaded duplexes must be annealed to the nanoclew.

In this experiment, we take the preliminary step towards attaching drug-loaded duplexes by assessing the number of GI-based duplexes that can be annealed to nanoclews in a w/w ratio. This assessment was performed through the use of polyacrylamide gel electrophoresis (PAGE).

Nanoclews resist degradation when exposed to nucleases, diluted to low concentrations, or are in human serum.  This property makes them suitable for drug delivery in vivo [1]. When GI-based duplexes are annealed to a nanoclew, a stable structure capable of delivering a concentrated dose of therapeutics with high specificity is created.

To facilitate conjugation, the nanoclew template contains an overhang binding site complementary to the overhang sequence on GI-based duplexes. We chose to examine binding efficiency using a w/w ratio because it is important to determine the saturation level of duplex binding to nanoclews in order to create GI-Nc complexes with a consistent amount of drugs loaded onto each one.

To determine the most efficient w/w ratio for annealing GI-based duplexes to nanoclews.

Nanoclews produced by RCA for a duration of  6 hours were prepared according to “Sizing and Characterization” and resuspended in IDTE buffer. GI-based duplexes were synthesized in IDTE buffer by heating to 95°C for 5 minutes and then cooling to 4°C in a thermocycler. Both were then Nanodropped to determine the concentration of DNA in nanograms per microliter.

To anneal, the samples were heated to 95°C for 5 minutes, then incubated at room temperature for three hours.

An 8% polyacrylamide gel was prepared accordingly:

Samples were loaded with a 100 bp DNA ladder (NEB) and run at 150V, 40 mA for 30 minutes. The gel was then stained with Sybr Gold and imaged using the MultiImage Light Cabinet and AlphaImager EC. 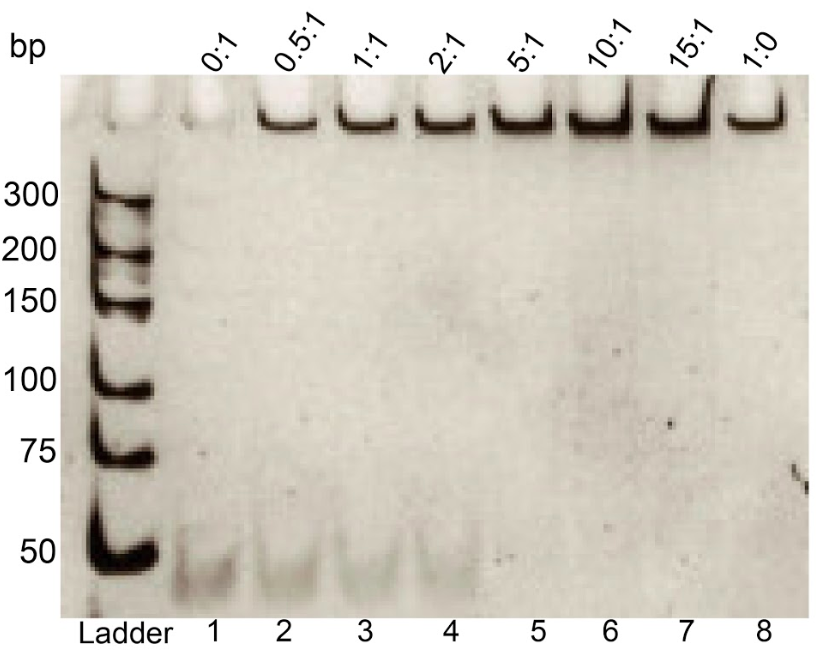 Annealing of duplexes to the nanoclew is evaluated by assessing the duplex’s band intensity on a polyacrylamide gel. The nanoclew is too large to travel down a polyacrylamide gel so it will remain at the top, along with any duplexes bound to it. Since the amount of duplexes in each sample is the same, band intensity is solely determined by the amount of free duplex. Looking at Image 2, a gradual lightening of the band denotes that the duplex is apparent as the concentration of nanoclews increases. At a nanoclew:duplex ratio of 5:1, the duplex’s band disappears, signifying that all duplexes have been annealed.

Through the use of PAGE, we have verified that duplexes are capable of annealing to nanoclews, and that, at a nanoclew:duplex w/w ratio of 5:1, all duplexes are bound. In accordance with expectations, increasing the amount of nanoclew steadily increased the amount of bound duplex. These results validate the sequence design for the nanoclew and duplex and demonstrate the viability of using the nanoclew as a vehicle for stabilizing and transporting drug-loaded duplexes.